Max Verstappen and Lewis Hamilton will start their decisive final battle in one of the greatest Formula 1 seasons in history alongside each other on the front row of the grid at the Abu Dhabi Grand Prix.

Both Hamilton and Verstappen go into the final race locked together on 369.5 points – only the second time this has happened since F1’s first season in 1950.

Whatever unfolds, history will be made – either 36-year-old Hamilton will claim his eighth world title and become the sport’s most successful driver ever by surpassing Michael Schumacher. Or, 24-year-old Verstappen will win his first title to usher in a new era.

Verstappen has the advantage after taking pole position in his Red Bull with a quite exceptional lap around Yas Marina on Saturday that left Hamilton and Mercedes breathless.

“Max did a great job on that final lap,” Hamilton said, admitting there was no way he could have matched it.

But the battle is a long way from over, for the race is about as perfectly poised as it could possibly be in what is essentially a winner-takes-all contest.

The two title contenders start on different types of tyres, after Verstappen made a mistake and locked up in the second part of qualifying and damaged the set he wanted to use for the opening stint.

And their team-mates, who Red Bull and Mercedes want to use to help in the strategic battle between the two teams, are not right behind them, for Lando Norris produced his own stellar lap to put his McLaren third.

“I have the best seat,” Norris said. “I’m very excited to see what goes on.

“It’s a genuine pleasure to be in this position to see everything that has been going on this season between Max and Lewis, to watch the battles and the racing because I have a lot of respect for them.”

If you are viewing this page on the BBC News app please click here to vote.

Drama and intrigue on and off track

All weekend, the discussion in the paddock has been about the championship situation between the two contenders. Although they are tied on points, Verstappen goes into the race with one key advantage – if neither finishes, he will be champion because he has one more win than Hamilton.

It is only seven days since Verstappen was penalised no less than three times for driving offences of one kind or another in Saudi Arabia, the last of which was a ‘brake test’, in which he hit the brakes with Hamilton right behind him, and the Mercedes hit him, despite Hamilton’s attempt to veer to the side.

The controversy in Saudi Arabia, and fears that things had gone too far between Hamilton and Verstappen, led race director Michael Masi to highlight in his event notes before the weekend clauses in the rules that give the stewards power to take championship points away if drivers behave in an unsportsmanlike manner.

The idea was to dissuade either of them from trying the sort of stunt Michael Schumacher notoriously pulled in title deciders in 1994 and 1997 – infamously colliding with his title rival knowing that he would be champion if neither finished.

On Friday, the point was re-emphasised in the drivers’ briefing, with the four stewards listening in.

And the drivers have had plenty of opportunity to understand that Verstappen’s usual modus operandi in defence of throwing his car up the inside and forcing both cars off the track will be frowned upon by the stewards this weekend.

Until qualifying, there had been no sign of the chilly relations between teams and drivers thawing at all.

Verstappen started the weekend complaining that he was being treated differently from other drivers by the stewards. Red Bull team principal Christian Horner has been making all kinds of claims about Mercedes in interviews in the days before the race, many of which have had eyes rolling among impartial and disinterested members of other teams.

All of this has added to the intensity of the battle, and the drama of the narrative, but in some ways it could be seen as an unfortunate way to end what has been one of the greatest seasons F1 has ever seen.

And after qualifying Verstappen took a step back from the immediate to consider what he and Hamilton have achieved this year.

“Lewis has won already so many championships,” he said. “But this year we have been pushing each other, certainly in some races, to the limit.

“We have been trying to get everything out of cars to the last lap and the last corner and that’s very exciting, especially when it is between two different teams.

“It has been really enjoyable. For most of the time. But that’s normal in a championship. Of course, in 10-20 years’ time people will look back at it, even myself, and remember this year for sure.”

Sitting beside him, Hamilton briefly paused, seemingly surprised by the sentiment of the answer, after so much invective in recent times.

“Well said,” he said. “I agree fully. It has been an incredible year.

“I am grateful I have had such a close battle with Max and his team. They have done an exceptional job and shown true strength. It has pushed us to the limit in ways that we needed, and we have grown stronger as a team in ways we didn’t know we could grow.”

What to expect from the race

The trend of performance over the last few races has very much been in Mercedes’ favour, so Verstappen’s pole position was against expectation – especially the margin of his advantage.

Hamilton was genuinely impressed, and so was two-time champion Fernando Alonso.

Alonso had also been in awe of the lap Verstappen was on in Saudi Arabia last weekend, when the Red Bull driver was on course for another jaw-dropping pole only to crash at the final corner.

Verstappen made no mistake this time, but there may yet turn out to have been be parallels between the two races.

In Jeddah, Verstappen was on target for a margin of about 0.4secs over Hamilton, but at least some of that pace advantage was explained by the fact that the Red Bull was able to get its tyres instantly to ideal working temperature, while Mercedes were not.

In the race, though, the tables turned. The Mercedes’ gentle treatment of its tyres then turned into an advantage, and Hamilton was clearly quicker, an advantage that eventually became decisive. 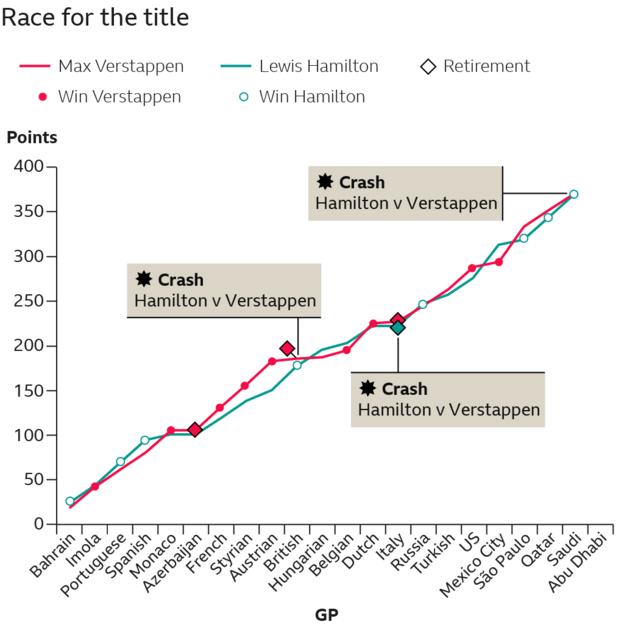 On Saturday in Abu Dhabi a similar thing seems to have happened. Mercedes said they felt their tyres had dropped out of the ‘working window’ in the cooling temperatures as the sun set over the Persian Gulf.

That does not mean the race will necessarily work out the same away as it did a week ago, but it’s an intriguing extra dimension to consider.

As is the tyre choice of the two title contenders.

It all but guarantees that Hamilton and Verstappen will end up on divergent strategies, with differently timed pit stops, with one likely to be on fresher tyres in the final part of the race trying to attack the other.

This is the way in which Hamilton has taken two of his last three victories, having passed Verstappen in dramatic tussles in both Brazil and Saudi Arabia.

But having done it before, there is no guarantee he can do it again, especially after the blistering pace shown by the Red Bull on Saturday.

The ‘medium’ tyres on which Hamilton starts the race are slower over one flying lap, but faster over a full race stint, and last longer.

The softs, on which Verstappen, Perez and Norris will all start the race, offer more initial grip, so Hamilton will have to be wary not to lose places at the start. But they go off quicker.

So it is a reasonable expectation that Verstappen will have to stop first, after which Hamilton will run a bit longer, and have fresher, faster tyres for the second part of the race.

It’s the sort of situation that could set up a dramatic climax in the closing laps.

Verstappen admitted that he wanted to start on the mediums. He could hardly not, when he was broadcast swearing over the team radio when he locked up and damaged his tyres. But he played down the significance of his error.

“It wasn’t the plan,” he said. “I wanted to try and start on the medium but I flat-spotted that one. But I felt good on the soft also on the long run [on Friday] so it was not really a difficult decision to just say: ‘OK, let’s focus on the soft.'”

Mercedes team principal Toto Wolff said: “I believe that starting on the soft is a disadvantage. It may not be. You may disappear into the distance with the soft in the first few laps and hold track position. But there could be quite some degradation.

“It’s two different strategies and then see what works.

“I have no doubt the drivers will race hard but I have confidence it will be hard but clean, not pushing anybody off or hitting anybody. And this is what this epic championship deserves as a final.”