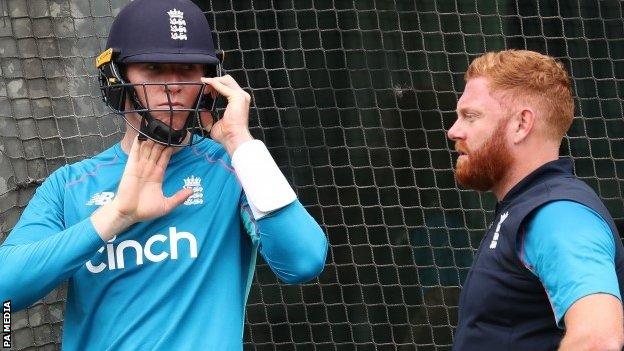 England have made four changes to their team for the third Ashes Test against Australia, which starts at 23:30 GMT on Saturday in Melbourne.

England trail the best-of-five series 2-0 and must win at the Melbourne Cricket Ground to keep the Ashes alive.

Australia have made two changes, with captain Pat Cummins, who missed the second Test in Adelaide after being deemed a close contact of someone who tested positive for Covid-19, returning to the side.

Scott Boland will become the second player with Indigenous Australian heritage to play for the men’s Test team when he makes his debut at his home ground, following Jason Gillespie, who played his final match in 2006.

The 32-year-old fast bowler comes in for Jhye Richardson, with Michael Neser making way for Cummins.

Boland, who has played 17 games for Australia in white-ball cricket, has a strong record at the MCG in domestic cricket and Cummins said this played a “huge part” in his selection.

Surrey’s Burns hit a battling 34 in the second innings of the second Test at Adelaide but he has scored just 17 runs in his other three knocks – including being bowled off the first ball of the series in Brisbane – and averages 12.75.

The 31-year-old is the only England player other than captain Joe Root to hit a Test century in 2021, against New Zealand at Lord’s, but he has also been dismissed for nought six times.

His replacement Crawley, who looks set to open with Haseeb Hameed, averages 11.14 in 2021. The 23-year-old, who will be playing his 16th Test, has a top score of 267 which accounts for a little more than one-third of all his Test runs.

Pope, batting at number six, has had a torrid time in the opening two Tests. The 23-year-old has scored just 48 runs and his career average has dipped below 30.

Bairstow is more experienced and on his third Ashes tour of Australia. The Yorkshireman scored a century in Perth on the last trip, but has a top score of just 57 in 15 innings this year.

He will not take the wicketkeeping gloves though, with Jos Buttler, who has dropped several chances in the series, retaining his spot behind the stumps.

And Buttler is determined to make amends for his mistakes in front of an expected 70,000 fans at the Melbourne Cricket Ground.

“I’m sure it will be a hostile environment but that’s to be embraced and enjoyed, everyone is excited to be here. We know we need to bring our best cricket because we haven’t done that so far and that’s disappointing.

“With the situation we’re in, we need to get there fast.

“This is why you play the game, because you want to be part of big occasions. It isn’t always going to be easy, but you need to turn up in tough situations and play well when it’s hard.”